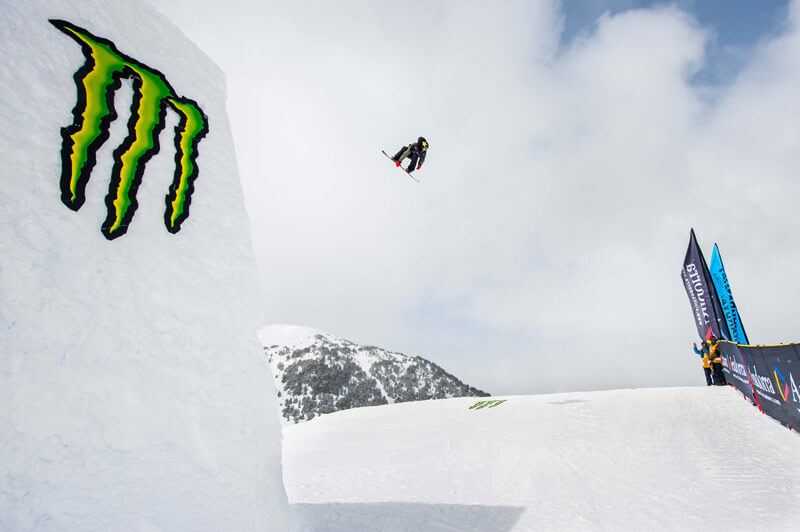 Sunday, March 25, 2018. The snowpark of El Tarter has experienced an exciting day of competition with the dispute of the Grandvalira Total Fight snowboarding. Slopestyle event within the World Snowboarding main calendar.

A unique session with the highest level of riging seen in El tarter with 1440’s and triple corks permormed by the riders.

A total of 42 riders, 31 in the men’s category and 11 in the women’s category, have given their best to take the victory. Riders from the USA, Japan, Canada, Russia, Switzerland, Norway, Sweden, New Zealand, Italy, Belgium, Andorra and Spain have presented their best tricks in a very versatile slopestyle circuit, consisting of a double tube rail 10 meters, followed by a rail in double tube and “Y” shape, then a module with three possibilities: gap to Donkey Tail or option to Pull Jam or gap to ball option. Next, three kickers followed; the first 21 meters and the last two 18 meters. Allowing riders to perform their best tricks.

Dylan Thomas takes the victory ahead of a great Kaito Hamada

As for the men’s category, the American Dylan Thomas has achieved the best score of the final after making a frontside boardslide 270 in 270 out on the first rail, frontblunt switch 450 out on the second rail, 50/50 frontside 360 tail out in the third module of jibbing and a frontside 1440 melon in the kicker. Result that has served to overcome and stop the unleashed Japanese rider Kaito Hamada who has been very close to victory after making a spectacular round in the jibbing modules. The third position of the podium would also be occupied by the Japanese Takeru Otsuka.

Dylan Thomas, after winning, would comment exultantly: “This is incredible, something wonderful. This morning, my first sensations in the park were not good, I felt tired. But then everything has changed and I have taken enough confidence to face the competition in search of victory. My second round has been very good and it has taken me to the first place. It’s the second time that I’ve come to compete in the Grandvalira Total Fight and I feel very comfortable, I love Andorra and how people treat us. “

She would not disappoint, she would make three very consistent rounds in the final to take the victory, her best round being a switch boardslide to normal, backside 50/50 and ollie tailbonk in the rails, followed by a backside 900 mute in the kicker. Fujimori commented: “I am very happy, it has been a very worked victory and at all times I have felt very comfortable in Andorra. I liked the slopestyle circuit a lot.”

The Canadian Brooke Voigt and an inspired María Hidalgo would accompany her on the podium. The Spanish would rise to the deserved podium after a long period of recovery due to injury: “It was a technical competition because of the speed in which the jumps were reached, the truth is that I did not expect the podium since I come out of a very long injury; A month and a half ago I returned to the snowboard and recently won in a European Cup; but to come here, in a competition of so much international level was a greater challenge. My intention was to have fun and do my best … much better if it’s on the podium!”