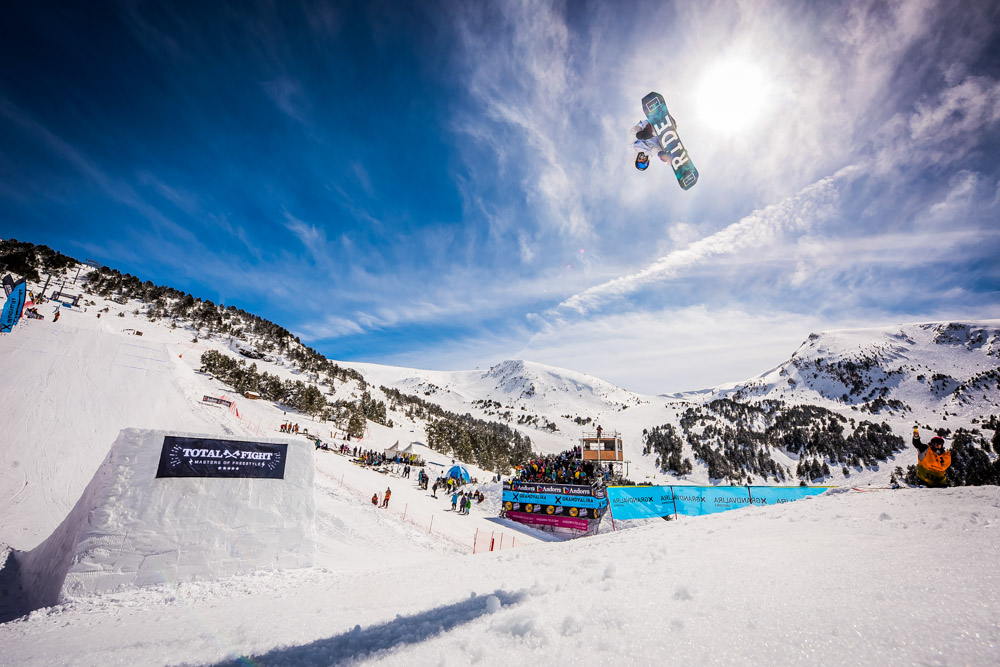 Kunitake, 15 years old, has surprised all his rivals
Blouin, has ratified his favorite role in this edition

The Grandvalira Andorran ski resort has become the epicenter of freestyle snowboarding this weekend with the arrival of the 13th edition of Grandvalira Total Fight, a maximum category event within the World Snowboard Tour circuit.

Riders from the United States, Canada, Japan, Chile, Russia, Norway, Finland, Sweden, Austria, Switzerland, France, Poland, the Netherlands, Spain and Andorra have presented their credentials to fight for victory in El Tarter Slopestyle, Andorra. Alongside the men’s competition, for the first time has been disputed the women’s competition.

On Sunday, March 26, it has risen with a sunny day and has welcomed Grandvalira Total Fight in unbeatable climatic conditions, clear sky and ideal temperature to keep the modules in perfect condition; also thanks to the exquisite work of the shapers of Grandvalira and that has been applauded by the riders.

The technical team of Grandvalira prepared a Slopestyle circuit composed of 6 modules, in this order: the first, a transfer to Rails Double Kink and Brighton. The second, multi options container with Wallride, Rail Gap to Step Up Step down and railing. The third one, Gap to rail with option of Quarter Butter Box and Rail Donkey Tail in descent. The fourth, a 21 meter flat kicker. The fifth, one of 18 meters flat. The sixth and final, another 18 meter flat kicker.

After the free practice, the females would open the competition and where in the qualifying session they would fight to sneak among the 4 best that would happen to the grand finale. With the two qualifying rounds remaining, the best score in this session would be for the Dutch Cheryl Maas, with a very complete second round. They would accompany it to the grand finale and by this order of classification: the Japanese Yuka Fujimori, the Canadians Brooke Voigt and Laurie Blouin.

In the men’s qualifying session, in group 1, the Norwegian Bendik Gjerdalen, the American Eric Willet and the Japanese Ruki Tobita will be in the final. In Group 2, in this order, the American Nikolas Baden – with a first demolishing round, the Japanese Keita Inamura, Hiroaki Kunitake and Kaito Hamada, as well as the American Brandon Davis, would pass to the final.

There would not be his day Canadian Tyler Nicholson, silver medalist in the X Games of Aspen 2017.

With the finals, the moment of truth would come, where victory would be played. Three rounds for each rider looking for the best score. In women, Laurie Blouin recovered her best form and in the third round she would get the maximum score of the final after making a round composed by a bs lipside – 50/50 tailgrab – bs 50/50 – bs 180 melon – cab double cork 900 – Fs 720. She was accompanied on the podium by her compatriot Brooke Voigt, Yuka Fujimori and in fourth position, Cheryl Maas.

After the victory, the Canadian Laurie Blouin commented: “It has been incredible, the day has risen perfect and I have done my best to square my tricks. The circuit was fun, allowing different options. I’m very happy. ”

Kunitake commented after winning in this edition of Grandvalira Total Fight: “I’m happy, the circuit I liked a lot and I’m delighted how Grandvalira has taken care of us all the weekend.”

Being habitual, the Grandvalira Total Fight has its àpres ski in the popular L’Abarset; on Saturday night came the Monster Total Fight Party with the live performance of the Crappy Tuesdays, punching the best Indie and Electro Pop music from the factory Nasty Mondays.