The fifteenth edition of the Grandvalira Total Fight in snowboarding will be remembered for the immense level of the riders and that would make enjoy the spectators in the stands of the El Tarter snowpark and the fans who could live in the online media.

After the exciting qualifying session yesterday, where the American Judd Henkes and the Japanese Yuka Fujimori got the best score of the day, the best eight men and the four best women would go to the final on Saturday. The great rivalry between the riders would pause in an exciting final and in which each snowboarder would have three attempts to get the best score.

The riders would face a very technical circuit that would force to chain the features very smoothly if they did not want to be stopped in the attempt; determining factor to rise to the podium. The four women finalists would be the first of the day to go out to compete, the duel between Julia Marino and Yuka Fujimori would be served. The American would come to Grandvalira as the favorite and the Japanese wanted to climb back to the top of the podium after the victory last year at El Tarter. After a very fluid first attempt, Marino would make a winning second round by chaining a Lipslide 270, 50/50 / FS 360 and Lipslide in the jibbing zones, as well as a BS 720 melon, followed by an FS 540 and a 540 underflip in the kickers area. Fujimori would try to snatch the victory in the last attempt but would not achieve its purpose. Finally, the third box of the podium would be for the Canadian Brooke Voigt.

Julia Marino, after winning for the first time in the El Tarter snowpark, would comment: “It has been a very fun competition, for me it is one of the best events I’ve been to. In super fun spring conditions, I had a great time and at the same time it has been a great challenge since the first trainings; but, step by step, I was gaining confidence until today. I want to thank the organization for the good work they have done in the slopestyle circuit”.

The winner of the XGames of Aspen 2017 would culminate a spectacular month of March, with victory in the FIS World Cup in Canada and 2nd in the Burton US Open in the USA.

The excitement would extend with the arrival in competition of men. All eyes would be placed on the world number one in slopestyle discipline, Mark McMorris; but the Canadian would not have his best day having problems to overcome the jibbing zone on his first and third attempts; being his second round which would give him the second final position. In contrast, the Swiss Michael Schaerer would gave the surprise to get the best victory of his career after making a great third round composed of a Cab 270 BS lipslide switch boardslide underflip 450 tuck knee and a FS 270/450 in the jibbing area, followed by a BS 1260 mute, switch BS 1260 mute and FS 1080 nose in jumps. 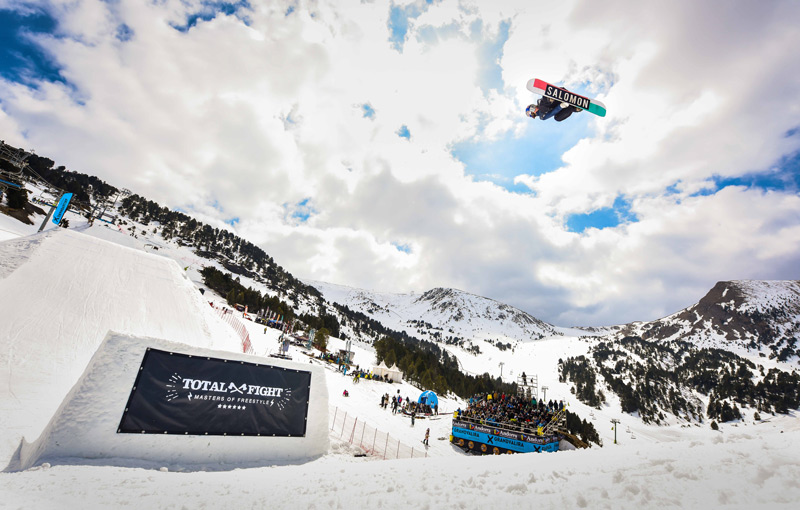 Schaerer would be exultant after being able to overcome all his rivals and comment at the end of the competition: “It was unexpected, I did not think it would happen, I still do not believe it. It is the best result of my sports career, I was injured a while ago and I could not compete much. After my first and second attempts it was difficult to reach the podium but the third and final round was a huge surprise, the best thing that ever happened to me. This slopestyle circuit is amazing, the jumps were super well done, the rails area was very smooth, everything went great”. The Norwegian Bendik Gjerdalen would finish in third position, beating the Americans Lyon Farrell, Luke Winkelmann and Judd Henkes.

L’Abarset Après-ski in El Tarter would be the place where the awards ceremony would be held to the top four finishers and culminate with the Total Fight party and the performance of the renowned band Nasty Mondays. An edition of the Grandvalira Total Fight in snowboard that will be remembered for the story.